2005-2006 ME 72 Engineering Design Laboratory and Competition 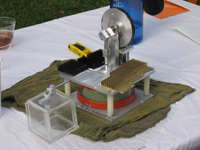 The goal of the ME 72 contest is for student teams to design a small Stirling engine, which will be powered from waste heat from a low-temperature source. This small engine (power production on the order of 1 W) can be used to power a device of the student's choosing (such as a fan, a light bulb,…).

There are restrictions on size, source of heat, and materials that can be used in the engine. By midterms, students will be asked to submit a proposal that outlines the device design as well as specifications for power, speed, size and cost. A “Power On” (a contest modeled on a cook-off) will be held at the end of the quarter (December 1, 2005). The winner will be determined based on a range of factors including creative use of output power, quality of design and manufacturing, engine power and speed, as well as a determination of how well student devices meet design specification.

A Stirling engine is an externally-heated engine that can run on virtually any fuel or heat source. For the contest, the input heat to the engines will be from waste heat from a large cooking griddle in Chandler Dining Hall. During the contest, however, the griddle will only be used for powering the engines and not for cooking pancakes.