2000-2001 ME 72 Engineering Design Laboratory and Competition 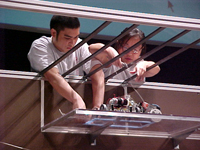 Within a large plexiglass box, devices must move magnetic objects from the bottom to scoring zones on the back wall. Participants compete in teams of two; each person designs and builds a device.

At the start, each team’s devices are positioned within their start zone on opposite sides of a suspended shelf. A ramp leads around the inside of the box from the shelf to the bottom. Initially, 8 scorable items (SI’s), which are cubes and cylinders each containing magnets on some faces, are positioned on the bottom of the box. During the 60 seconds of battery provided radio-controlled electrical power, each team uses its devices to attempt to attach SI’s, by their magnets, to scoring zones on a steel-backed wall.

Each team’s score at the end of each contest is based on the number and location of the SI’s attached within its scoring zones. Each cube is worth 1 point and each cylinder is worth 2 points. The back wall is divided into scoring zones with values of 1 and 3. The score for each SI is determined by multiplying its point value by the value of the zone in which it is attached. The team with the most number of points at the end of 65 seconds wins. An overall winner will be determined in a modified round-robin tournament, followed by a single-elimination playoff tournament among the top 4 teams.