The free energy plays a fundamental role in theories of phase transformations and microstructural evolution in crystalline solids. It encodes the thermodynamic coupling between mechanics and chemistry within continuum descriptions of non-equilibrium materials phenomena. In mechano-chemically interacting materials systems, consideration of compositions, order parameters and strains results in a high-dimensional free energy density function. Since its origins lie in the electronic structure, a rigorous representation of the free energy presents a framework for scale bridging in solids. In this study we have been exploring such a framework, while developing practical machine learning methods to contend with high dimensionality and efficient sampling. We have developed integrable deep neural networks (IDNNs) that are trained to free energy derivative data generated by statistical mechanics simulations. The latter are based on cluster Hamiltonians, themselves trained on density functional theory calculations. The IDNNs can be analytically integrated to recover a free energy density function. We combine the IDNNs with active learning workflows for well-distributed sampling of the free energy derivative data in high-dimensional input spaces. This enables scale bridging between first-principles statistical mechanics and continuum phase field models. As prototypical material systems we focus on applications in Ni-Al alloys and in the battery cathode material: LixCoO2. 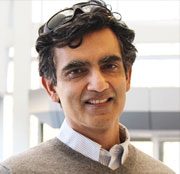 Krishna Garikipati obtained his PhD at Stanford University in 1996, and after a few years of post-doctoral work, he joined the University of Michigan in 2000, where is now a Professor in the Departments of Mechanical Engineering and Mathematics. Since 2016 he also has served as the Director of the Michigan Institute for Computational Discovery & Engineering (MICDE). His research is in computational science, with applications drawn from materials physics, biophysics, mechanics and mathematical biology. Of recent interest are data-driven approaches to computational science. He has been awarded the DOE Early Career Award for Scientists and Engineers, the Presidential Early Career Award for Scientists and Engineers (PECASE), and a Humboldt Research Fellowship. He is a fellow of the US Association for Computational Mechanics, a Life Member of Clare Hall at University of Cambridge, and a visiting scholar in Computational Biology at the Flatiron Institute of the Simons Foundation.