Evolution of Tunable Laser Absorption Sensors for Combustion and Propulsion

Wavelength-tunable, narrow-linewidth continuous-wave (CW) lasers offer unique opportunities for spectrally resolved, line-of-sight absorption spectroscopy with many applications in fundamental science and engineering practice. The availability of these laser sources has continued to improve from their early beginning nearly fifty years ago, with particularly important progress in recent years to extend the available wavelength range into the mid-infrared where many species of interest to propulsion and combustion have strong absorption features. A key virtue of spectrally resolved absorption is that enables in situ measurements of multiple gas dynamic properties of interest, including temperature, pressure, velocity and species, often simultaneously, as well as derived quantities such as mass or momentum flux. In their simplest form, measurement strategies are based on either wavelength-scanned direct absorption or fixed-wavelength absorption, the latter being capable of high temporal resolution. More sensitive strategies are also available, including wavelength modulation with harmonic detection and cavity-enhanced absorption. This presentation will trace the evolution of tunable laser absorption spectroscopy (TLAS) as a diagnostic concept over the past forty years, with examples drawn from diverse combustion and propulsion environments representing a wide range of flow parameters. 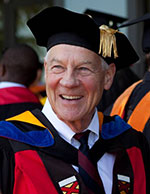 Professor Hanson earned B.S. and M.S. degrees in mechanical engineering from Oregon State University and Arizona State University, respectively, and a Ph.D. in aeronautics and astronautics from Stanford University. He has been affiliated with the mechanical engineering department at Stanford since 1972, serving as department chair from 1993-2003 and holding the Woodard Chair from 1994. He has advised over 95 Ph.D. graduates, including 24 appointed to faculty positions, and authored or co-authored over 1000 technical publications in the fields of laser diagnostics and sensors, shock wave physics, advanced propulsion and combustion chemistry. Dr. Hanson is a Fellow of the American Institute of Aeronautics and Astronautics (AIAA), the American Society of Mechanical Engineers (ASME) and the Optical Society of America (OSA), and is a member of the National Academy of Engineering (NAE). He is a recipient of the Silver Medal and the Alfred Egerton Gold Medal of the Combustion Institute, the R.I.Soloukhin Award of the Institute for Dynamics of Explosions and Reactive Systems (IDERS), the AIAA Awards for Propellants and Combustion and for Advanced Measurement Technology, and a co-winner of the SAE Colwell Merit Award. He is an Honorary Professor at Xi’an Jiaotong University and Northwestern Polytechnic University in China and is an Honorary Guest Professor at the University of Duisburg-Essen in Germany.